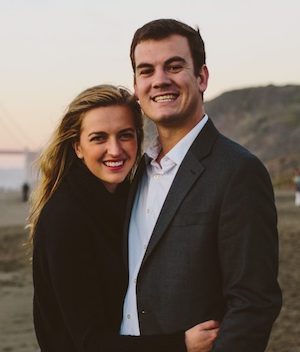 One day while driving, Scott and Kylie Hempy noticed they were nearly out of gasoline, and they joked about getting a roadside fuel delivery. Tanker aircraft refuel Air Force One and fighter jets in mid-air, they reasoned. Could tanker trucks do the same for cars?

Scott ’14, who worked at a venture capital fund, began seriously studying such a service. When he discovered it was legal and no one was providing it, he shared the idea with Chris Aubuchon ’94, a managing director at his firm. After additional research, they quit their jobs and co-founded Filld, which delivers gasoline ordered through a mobile app. Crawford Ifland ’15 and Jake Allbaugh’15 also worked on the original team. Filld began fuel deliveries in the Bay Area in April 2016 and hopes to expand to Los Angeles and San Diego.

“You can have anything delivered in the Bay Area if you’re willing to pay for it,” Kylie ’14 says. “Why not gasoline?”

Filled charges an average of local gasoline prices plus a flat, $3-$5 fee. Owning and operating trucks requires less investment and overhead than a gasoline station, making the enterprise feasible. Customers can get their cars refueled while they sleep, work or run errands. Filld now employs 22 people, including drivers, mobile app developers and marketers.

Scott and Kylie met at Westmont their first year and got married right after graduating. The two economics and business majors enjoyed an array of experiences, including Europe Semester and a Westmont in San Francisco summer program aimed at business students. Scott also participated in Westmont in Haiti, which uses microfinance to launch small businesses during spring break. Professor Rick Ifland, who leads the program and directs the EatonCenter for Entrepreneurship and Innovation, has mentored them.

“I interned at a bank and discovered I didn’t want to go into banking,” Scott says. “I like the finance of business, but I don’t want to do it all day long.” He handles the business side of Filld, overseeing business development, strategy and partnerships. “I like that variety,” he says.“Westmont trains you for a lot of things. That’s useful at a startup where you wear 100 hats and solve lots of problems. I’ve realized that the liberal arts aren’t a cliché.”

Chris manages the technical side of Filld. A veteran entrepreneur, he founded Exajoule in 2002, invented its foundational patents and spent more than eight years as president and CEO before working in corporate development at Tessera Technologies. He earned a doctorate in physical chemistry at Stanford.

Kylie chose economics and business because she saw it as a launching pad. “I got a taste of everything at Westmont,” she says. After intensive networking, she took a job in site merchandising at Shutterfly and now works in that field at eBay. She put in a lot of time on Filld the first year but kept her job. “At Westmont, we both learned how to pursue strong mentors and relationships with older and wiser alums,” she says. “With hard work and luck, we’ve found life after Westmont intellectually stimulating and fulfilling.”