Westmont Magazine Healing the Marginalized in a Pandemic 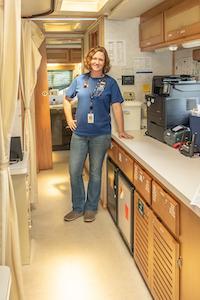 Physician assistant Kerry McGuigan Gillette ’05 serves on the front line of the coronavirus pandemic, running Mosaic Medical’s Mobile Community Clinic and treating the homeless and at-risk youth in Central Oregon. Initially, clinic leaders wanted to shut down the specially outfitted RV, fearing for the safety of the medical team. “While the rest of our community might have access to telemedicine appointments, the majority of my homeless patients do not,” Kerry says. “I was strongly opposed to pulling back completely, as it would effectively cut off my patients from access to primary care during a pandemic. That was unacceptable to me.”

She crafted a compromise that allowed her to continue using the van. Patients now check in outside the van, communicating through a two-way baby monitor instead of waiting inside the cramped space. Kerry then calls them to a mobile phone outside, and the patient receives a telephone appointment. If she has to examine a patient, she wears full personal protective equipment and sees them outside the van. She only brings a patient inside if absolutely necessary.

Kerry hopes that through partnerships with other organizations, people experiencing homelessness will get enough food, water, fuel and supplies to shelter in place in their tents and campers, reducing their risk of contracting or spreading COVID-19. “So far, our approach seems to be working well,” she says. “Folks appreciate that we still come out to serve them so they don’t have to congregate, and I feel like we’re continuing our mission to get care to the most vulnerable.”

Kerry grew up in Egypt with her parents, Dan McGuigan ’77 and Kathy Perkins McGuigan ’77, who taught at the American International School in Cairo for 18 years. At Westmont, Kerry began a pre-vet track before following in her parents’ footsteps and studying education. “At Westmont, I was challenged and prepared academically,” she says. “What I appreciate more now is the foundation of having a softness of heart, a curiosity and grace for the other, especially within Christendom. It’s allowed me to be unafraid of following Jesus into really hard places without feeling the need for answers all the time.”

After graduating, she realized she wanted to move back overseas and taught third grade in Cairo for three years. She then decided to pursue a career in health care to help the most vulnerable patients, and she enrolled at the University of Utah School of Medicine. Later, while her husband, Marcus ’05, earned an MBA and a master’s degree in international development at American University in Washington, D.C., she worked in the clinic at a city jail.

“I never set out to work in a jail,” she says. “I really wrestled with God about it.” She convinced herself she could stick it out for six months, which turned into nearly four years. The experience changed her profoundly.

She heard stories from the predominantly African American inmates about the broken justice system and the communities that turned their backs on people trying to rebuild their lives after incarceration—their trauma, grief and poverty. “There is significant generational poverty on a foundation of racial injustice,” she says. “I was blessed to examine many painful things in myself: prejudice, power and privilege. I had to burn every last trace of white-savior complex in the crucible to avoid inflicting damage and more pain.”

She also developed a love for caring for women in the sex industry, the transgender community and those with HIV. “Honestly, I think that the more marginalized populations I work with, the more I’m convinced that’s where Jesus is,” she says. “People who love Jesus need to be in all settings, but especially with folks we churchy people are the least comfortable with, and to whom we’ve shown the least grace over the years.

“Advocating for equal if not superior treatment for my homeless and incarcerated patients and doing outreach to dancers in the strip clubs feels scandalously redemptive. Nothing is as powerful as affirming the Imago Dei in someone who has been devalued and dehumanized their entire life.”

Looking to the future, Kerry has dreams of expanding the medical outreach from Bend, Oregon, toward Idaho with multiple vans. Eventually, when her children are old enough to appreciate it, she would like to travel overseas to serve again in the developing world.