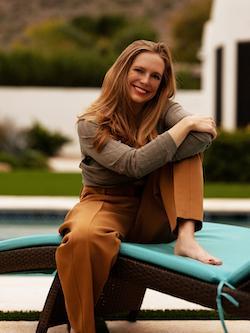 By the time Rachel Mertensmeyer ’09 recovered from a severe injury in 2016, she had received 38 medical bills from 11 health care providers and owed more than $10,000. She missed two months of work as an associate brand manager at Unilever. “I had really good insurance,” she says. “The company was supportive and kept me on. I had an amazing safety net, yet I still struggled to make sense of the bills. I realized how big a problem it is and how much worse it must be for people like single mothers.”

Rachel looked for a mobile app to help her organize and pay her bills. When she couldn’t find one, she decided to develop her own. She quit her job in New York City and moved to San Francisco, where she joined Launchpad Digital Health, an accelerator program for digital health care. Then she returned to Phoenix, her hometown, and co-founded RexPay in February 2018. Rachel serves as CEO. She raised $2 million and recruited software engineers to develop a mobile app that manages and pays all health care costs in one place. RexPay launched in November 2019 on both IOS and Android and reached 2,000 installs despite little paid advertising.

The app allows patients to scan, tag and organize their medical bills virtually. Users can pay any medical bill to any provider in the country, and the app can even set up payment plans and send notifications about upcoming deadlines. It also includes a chatbot to answer questions related to medical billing. Rachel compares RexPay to TurboTax, Credit Karma and Venmo “rolled together for health care.”

Initially, the company focused on maternity patients, who often face significant medical bills for the first time. On average, they receive 20 bills and owe $9,000 in out-of-pocket costs.

Then COVID-19 interrupted RexPay’s business plan. To deal with frozen capital, Rachel reduced her staff from 20 to 11. The pandemic presented a significant challenge. “But we focused on how to add value and help providers and patients in the new environment,” she says. “We began to brainstorm about responding to the biggest health crisis in a century.”

First, they offered the app to providers for free. When patients pay their bills through RexPay and find answers to their COVID-19 questions on the app, providers spend less time with them on the phone. In addition, RexPay helps collect outstanding patient balances so providers who had to close or reduce services could maintain some cash flow. Likewise, RexPay offered patients a free 30-day trial.

Rachel also worked with the Wellnus Company, which sells products and uses the proceeds to provide free health care at a Los Angeles clinic. RexPay purchased disinfecting wipes from Wellnus and donated them to providers in need. When the campaign launched, RexPay received more than 4,000 requests for wipes. Rachel and her team launched a GoFundMe campaign to provide as many as possible.

Modifying the app and shifting the focus to COVID-19 has elicited inquiries from 600 providers as well as some venture capital firms. By adapting, RexPay continues its mission of helping patients through the chaos of medical bills. Rachel’s COVID-19 response plan for investors outlines the virus’s potential impact on medical billing. She estimates that 20 million people could face out-of-pocket costs of $36,000 or more, and another 100 million could owe $100-$2,000 for tests or examinations. She wants RexPay to help.

Rachel transferred to Westmont to get a Christian liberal arts education. A communication studies major, she played the violin in the orchestra and took classes in Eastern Asia studies. At 15, she traveled with the Phoenix Symphony Guild to Shanghai and Beijing and developed a passion for Chinese arts and culture.

After graduating, Rachel settled in Shanghai to establish sales distribution for Adams French Vineyards. She stayed to work with two big advertising agencies advising western brands entering the Chinese market. In 2014, she moved to New York City to do brand management, first for Avon and then for Unilever, where she managed product development and brand marketing for Dove Men+Care and later Dove Haircare.

“After struggling so much with health care bills, I want to get RexPay in the hands of people who need it,” she says. “I want to rescue them from medical bill mayhem.”