Westmont Magazine A Novel Look at the First-Century World 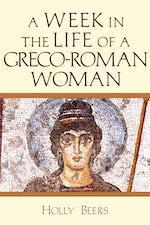 Holly Beers had read thousands of novels, especially historical fiction, but she had never written one. Then an editor asked her to develop a book about a first-century woman for the series “A Week in the Life.” When the Westmont New Testament professor learned she could create the storyline and characters herself, she agreed. Her novel, “A Week in the Life of a Greco-Roman Woman” (InterVarsity Press, 2019), focuses on Anthia, a young fisherman’s wife expecting her second child who struggles to survive in Ephesus.

“I wanted to write about the things women cared about, such as being healthy, preparing food, having babies and dealing with domestic abuse,” she says. “I used historical imagination to see the characters and watch them experience life, writing in the first person to invite readers into Anthia’s reality and thoughts.”

The novel describes the character’s daily challenges and her reaction to the teaching and work of early Christians, including Paul, Priscilla and Timothy. While Holly wove the historical setting into the story, she also created sidebars to provide more details about first-century life, such as diet in the ancient world. “I did a lot of research, so the novel contains a good amount of historical information,” she says. “I think we need to make specialized academic scholarship accessible to the church and the broader culture.”

Holly also contributes to scholarly publications, writing articles for journals and chapters for books. Her work includes a monograph, “The Followers of Jesus as the Servant: Luke’s Model from Isaiah for the Disciples in Luke-Acts,” and a recent chapter on the Old Testament background in Colossians. She co-edits a commentary series on the New Testament intended to serve the global Pentecostal/charismatic church with Asbury Seminary professor Craig Keener. Holly grew up in an Assemblies of God church and still feels at home in a charismatic setting, although she attends Ocean Hills Covenant Church with her husband, Max, and their three children.

Growing up in a blue-collar Minnesota family, Holly and her siblings were the first generation to go to college. Her parents encouraged her, but she had to pay her own way and figure out mysteries like “office hours,” which meant professors were available to meet with students and not, as she originally thought, shut away to work. After graduating from North Central University in Minneapolis, she earned a master’s degree in theological studies at Bethel Seminary in St. Paul and completed her doctorate at the London School of Theology in England. A New Testament and Greek scholar, she specializes in Luke-Acts, the use of the Old Testament in the New Testament and Second Temple Judaism. She also writes Greek devotionals for pastors.

Holly arrived at Westmont in 2012, filling in for professors on sabbatical, and the college found ways to keep her on until she stepped into a tenure-track position in fall 2019 as associate professor of religious studies. “I love my Westmont students,” she says. “They’ve been such a gift for me. They’re interested, engaged, do their homework, ask good questions and want to grow in their faith. I seek to help them develop theologically and make informed decisions about what they believe. They keep me at Westmont.”

She invites students in her smaller classes to her home. “I’m impressed with the tradition of students going to faulty homes, which I’d never experienced before,” she says. She also meets students in the Dining Commons through the Take a Professor to Lunch program. “We have meaningful one-on-one conversations and get to know each other.

“I care about my students knowing the New Testament and asking what it means to embody faith—how to live it, not just think about it. That’s such an important part of my teaching and scholarship. I see my work as a ministry, evangelizing and discipling students. They come to me when they have questions about their faith.”

Holly says her husband, Max, is her biggest supporter. “A big part of my scholarship involves my husband and my kids,” she says. “Max has always believed in me, and his support allows me to do what I do. He can handle being married to someone who has dreams.”