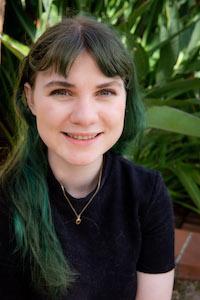 Anastasia Heaton ’20, a history major with an emphasis in Slavic and Eurasian studies, won a Critical Language Scholarship (CLS)—her second—to study Russian in Russia this summer before the CLS suspended all programs due to COVID-19. Instead, she’s taking virtual language classes after spending last summer studying Russian in Kyrgyzstan.

“Repeat awards are rare, which says a lot about her,” says Ed Song, associate professor of philosophy and fellowships adviser.

The CLS summer program, part of a U.S. government effort, seeks to expand the number of Americans studying and mastering foreign languages considered essential to the nation’s engagement with the world. Anastasia plans to reapply for the scholarship in the fall.

She thinks she won a second award because she made substantial gains in the language last summer. “The interdisciplinary edge the liberal arts education gives me also helped, as I linked my drive to learn the language with my history degree and with my work in Westmont’s theater department,” she says. “I believe it made me stand out from other applicants.”

Anastasia played the violoncello at Westmont, acted in “The Magic Flute,” managed Westmont’s Fringe Festival and served as a production stage manager for “Pride and Prejudice.” Her sophomore year, she appeared in Alyssa Walsh’s ‘19 senior project playing an embittered, modern-day Emily Brontë with secrets.

Before COVID-19, she had hoped to direct a show in the Westmont Fringe Festival that she wrote about the life of Russian poet Anna Akhmatova and the purges of the Leningrad Intelligentsia in the Soviet Union in the 1930s. “It’s quite a dark piece, navigating themes like memory, historical justice and censorship, but it combines my love of poetry, history, theater and Russian culture in the type of art I love to do,” she says.

Her mother emigrated from Russia to marry her father, but Anastasia grew up speaking only English. “I began studying Russian in high school because I wanted to communicate with my grandmother and other relatives,” she says. “I became more interested in international politics and history, and especially Russia.”

In Bishkek, Kyrgyzstan, she immersed herself in Russian, spoken throughout former Soviet bloc countries. “The best part was seeing the remarkable hybrid between the remnants of Soviet culture and the rich Kyrgyz and Central Asian heritage,” she says. “Bishkek feels very Soviet from its architecture to its institutions. But the strong familial culture, bartering at the bazaar or sleeping in a yurt were new to me and distinctively Central Asian. It was also my first time living in a country that is majority Muslim, which was transformational for me.”

Her biggest challenge was sticking with one of the CLS stipulations: never speak any English. “Many mornings when I woke up all I wanted to do was communicate comfortably, instead of in fragmented, semicoherent Russian,” she says. “I came in with pretty poor Russian skills, but my current level of fluency testifies to the remarkable efficacy of the program and total linguistic and cultural immersion.”

The 20-year old from Ramona, California, served in Westmont’s special collections, caring for and organizing the Dallas Willard Collection. An intern at the Santa Barbara Mission Library, she works in the rare books collection. “Archives make coming to terms with the past unavoidable,” she says. “It’s one thing to learn about the lone Nicoleño Native American woman of San Nicholas Island (popularized by ‘Island of the Blue Dolphins’) and try to understand her story. It’s another thing entirely to hold her feather cloak or the record of her baptism.”

Anastasia hopes to return to Central Asia to study, serve with an NGO or think tank, or work in the government. “I’m interested in memory politics, or how governments use the past and historical narratives in their politics, and I hope to pursue this in the post-Soviet world in graduate-level research,” she says.