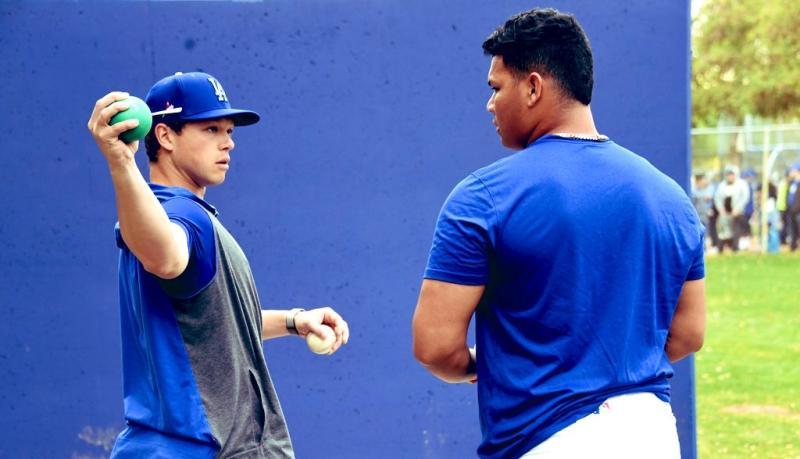 At age 24, Rob Hill ’18 became one of the youngest coaches in Major League Baseball when he signed on as pitching coordinator for the Los Angeles Dodgers. At Westmont, Rob pitched out of the bullpen for the Warriors in just 24 games. The often-injured right-hander may have contributed more to the Warriors off the field.

“He makes people around him better,” says Robert Ruiz, head baseball coach. “He was a bit of a coach on the field as a player and always had a critical eye for pitching delivery and training methods. He brought a level of passion and focus to our program and to our pitching staff unusual in college players. It was always clear he had a future in this game.”

During his freshman season at Skagit Valley City College in northwest Washington, he nearly quit the sport before finding Driveline Baseball. Six years ago, this academy was just sprouting in a dingy Seattle warehouse. Today it’s one of the most sought-out, data-driven laboratories for MLB pitchers who want to stay healthy or increase the speed of their pitches.

The following season, Rob threw a livelier fastball and earned a spot in Skagit Valley’s starting rotation. But a series of injuries led to shoulder surgery and a year of rehab. Former Warrior coach Jeff Calhoon, who had seen Rob pitch in Washington, invited him to Westmont.

“When I visited, my initial impression was that of awe,” Rob says. “The landscape, the campus, the weather and the people all stayed with me.”

He bunked with baseball players Andrew Devian ’17 and Michael Frigon ’17, who answered his questions about Westmont. “Meeting those dudes and the coaching staff convinced me I was supposed to be at Westmont,” he says. “I talked a lot about my faith with coach Calhoon during his visit to Skagit Valley, and it was a major factor in my decision. Committing to and attending Westmont was the best thing I could have done to ensure a lifelong commitment to living like Christ.”

After transferring, he redshirted his first year while returning to train at Driveline. He describes the academy as an Island of Misfit Toys, full of injured or discounted college ballplayers desperate to improve. “[It was] one of the first times in my life I felt like I was around other people who had similar qualities to me,” Hill says on a recent podcast.

When he returned to Westmont for his junior year of eligibility, he touched 90 mph on the radar gun his first game. Through 13.1 innings of relief, Rob finished the season with 21 strikeouts while holding opponents to a .184 batting average. Unfortunately, the injuries returned his senior year.

After graduating, he worked full time for Driveline. The communication studies major says he uses his education every day. “Baseball in 2020 is contingent upon the ability to relay complex information to players in a digestible manner,” he says. “I would not have the job I currently have without the skills I developed at Westmont.”

Rob says professor Greg Spencer’s rhetoric class made a profound impact. “I constantly strive for Greg’s undying commitment to excellence in the execution of minutiae,” Rob says. “His classes taught me how to listen, think, process and commit to my ideas. I still read the workbook from that class as it provides a road map to better thinking, better decision-making and better communicating.”

By 2019, Rob’s expertise and reputation had grown among MLB pitchers, who lined up to work with him at Driveline. “Meeting Rob, it’s been a huge blessing for me. I’ve learned so much from him,” says Dodgers pitcher Alex Wood in Dodgers Insider. Rob used Driveline’s synchronized high-speed camera systems to design drills for Dodgers ace Clayton Kershaw, who also visited the lab in the off-season. When Dodgers closer Kenley Jansen and Brandon McDaniel, Dodgers director of player performance, showed up to work with Rob, things started to click between Rob and Brandon. “We related to each other in a lot of ways,” Rob says. The Dodgers hired Rob December 23, 2019, allowing him to retain his position with Driveline.

“I’m thrilled but not surprised at the trajectory of his young career,” Ruiz says. “His intellect, understanding of biomechanics and human movement—especially pitching delivery—and his gift for pitch design set him apart. He is a relentless worker, a thoughtful leader and a person of great integrity.”